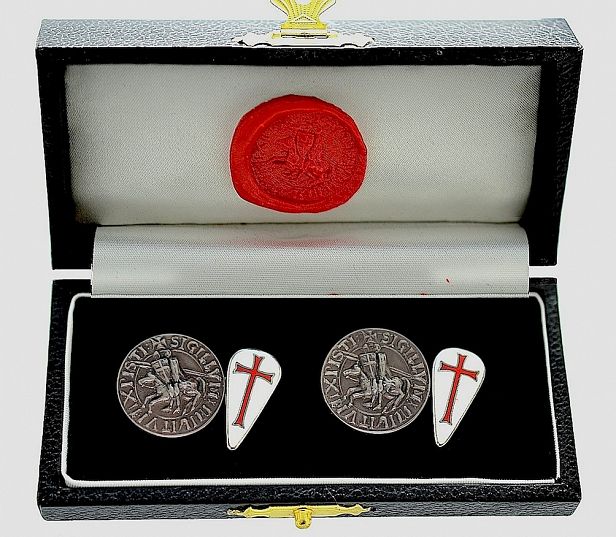 A pair of silver and enamel cufflinks

This lovely pair of cufflinks has a round silver top depicting The Seal of the Army of Christ one of the seals used by the Knights Templar. It represents two knights on one horse holding a spear that points forward. The horse is galloping from right to left. The back link is shield shaped and has a red enamel cross on a white enamel background representing the shield used by theKnights Templar. The front and back are linked by a round ended oblong silver link.
The cufflinks are presented in a casket shaped box with an impression of the Seal in red sealing wax inside the lid.

Originally the Knights Templar were known as the Poor Knights of Christ and the Temple of Solomon.
They originated in the Kingdom of Jerusalem in 1118 A.D., when nine knights, mainly French, vowed to protect pilgrims on the dangerous roads leading to Jerusalem. They gained the favour of King Baldwin II of Jerusalem who gave them part of his palace for their headquarters, which was located in the south-eastern part of the Temple Mount, called "Solomon's Temple".