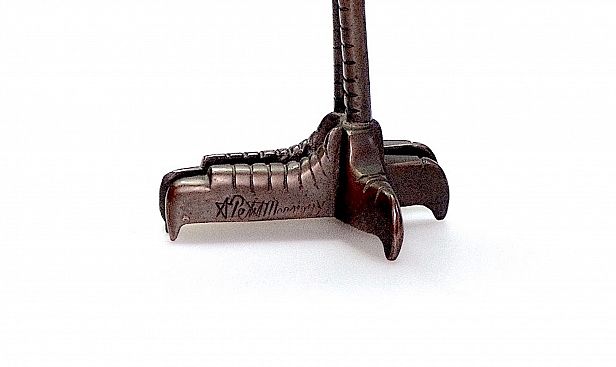 This fabulous bronze lamp is by Adolphe Petit-Monsigny and was made during the Art Deco period. The lamp is cast in bronze in the shape of a stylised ibis holding an amber glass flower shade in its beak. The lamp is signed "A Petit Monsigny" in script on the side of one of the feet. A really unusual lamp.

Adolphe Petit-Monsigny
(1860 - ?)
Petit-Monsigny was an ironworker & sculptor who lived & worked in Algiers at the end of 19th / beginning of the
20th century.
His workshop was at 50 rue Daguerre in Telemly, Algiers.
Exhibited at the Salon d'Automne in Algiers in 1926 and at the Galerie Charlet Algiers in 1938
He designed the portals of the Church of Saint Augustine in Algiers