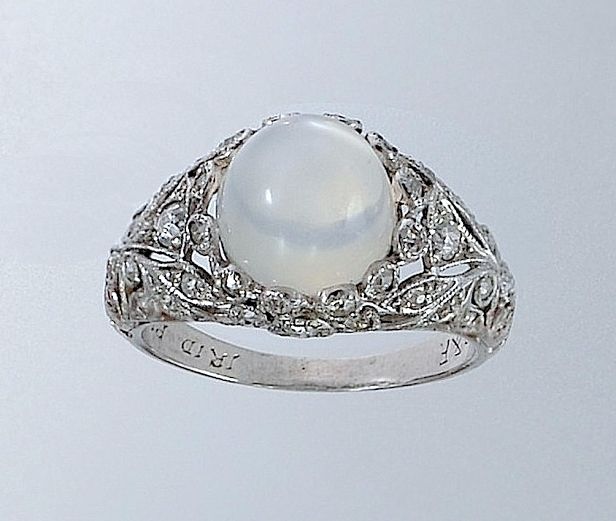 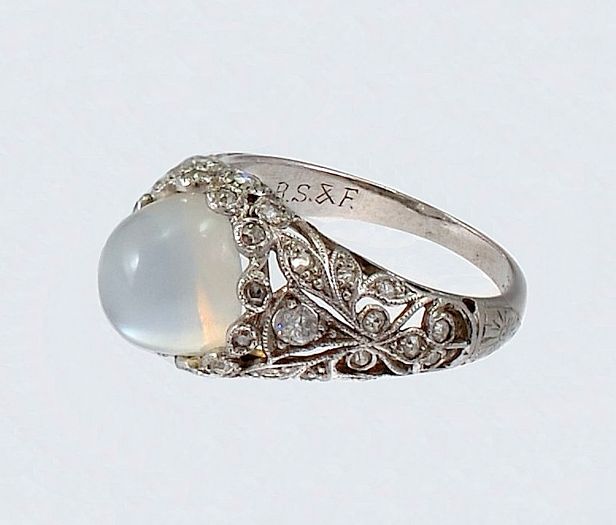 This beautiful platinum Art Deco ring has a slightly domed filigree work top in the centre of which is a fine sugar loaf cabochon moonstone with a fine eye. The filigree work is randomly set with round diamonds some in mille-grained rubover tube settings and some in bead claw settings. There are round diamonds set around the base of the moonstone in mille-grained rub over settings
The tapering platinum shank is stamped "B S & F" for Black Starr & Frost and Irid Plat for platinum.

Black Starr & Frost are one of America's oldest jewellers tracing its roots back to 1810 when Erastus Barton and Frederick Marquand opened Marquand and Barton near New York’s Maiden Lane. Its merchandise was eclectic and varied including, lamps, jewelry, paintings, porcelain, and artistic objects. In 1876, the firm changed its name from Black, Ball, and Co. to Black, Starr, and Frost, and moved to 251 Fifth Avenue. It then focused on jewelry and silver objects, some imported from Europe, some produced in-house. For many decades, Black, Starr, and Frost was considered one of the great American jewelers. In 1876, it was invited to exhibit at the Centennial Exposition in Philadelphia along with renowned firms like Tiffany & Co. Whiting, and Gorham. In 1929, it merged with Gorham to become Black, Starr, Frost—Gorham and in 1939, it was one of five American jewelers invited to exhibit at New York’s World’s Fair. In 2006, Alfredo Molina acquired the firm.Black Starr & Frost is now located in Costa Mesa, California.