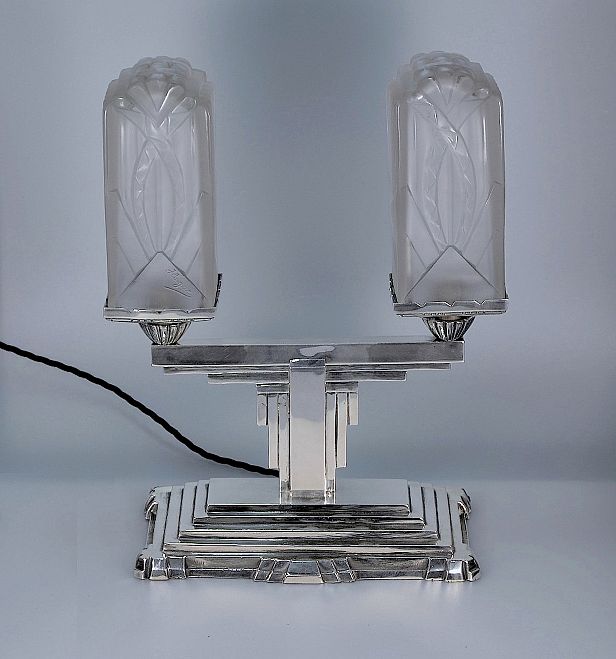 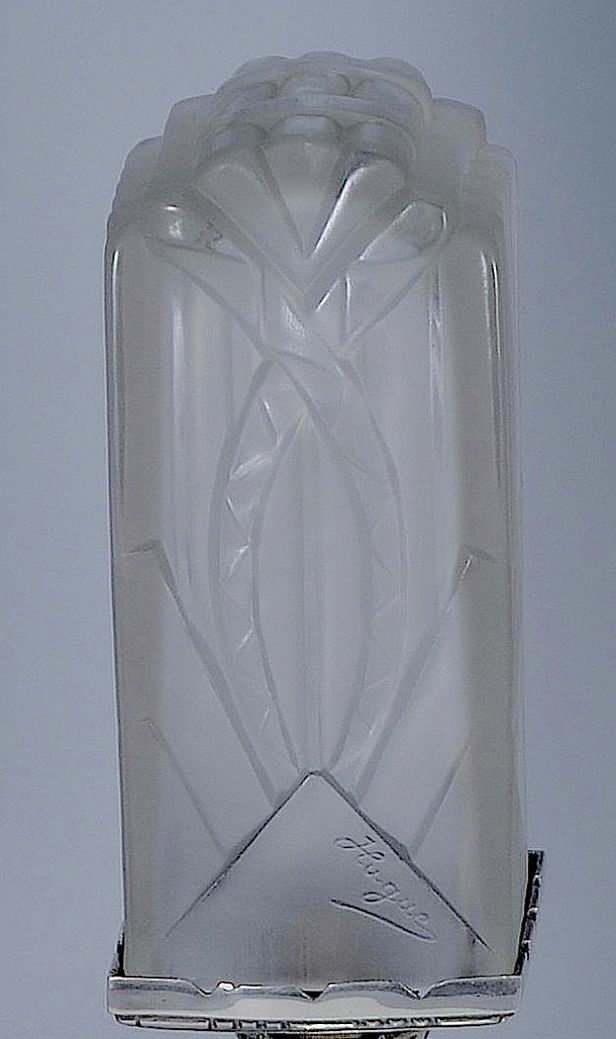 This majestic silver plated double lamp was made in the Art Deco period. The staged rectangular base supports a central square column that has staged flanges and supports a staged arm. At the end of each arm is a ridged cup from which 4 arms sweep up to the base of a square open bottomed gallery with crenelated edges. The shades are thick moulded frosted glass decorated with a geometric pattern, made by Degué and signed "Hugue" for Léon Hugue. The square bottomed shades sit in the gallery and fit over two metal rods that seamlessly keep them in place without intruding on the design. The underside of the base is stamped with what appear to be letters and/or numbers that sadly are not decipherable. There also appears to be the remnants of a mark on one side of the base. This is probably one of the best lamps that I have seen and certainly the best that we have offered for sale so far.

Degué
Degué was founded by David Guéron (1892 – 1950).
Born in Turkey, he joined the French Foreign Legion at the age of 22, being pensioned out after being wounded at the Western Front.
He set up his glass works in Compiègne after the 1925 Exposition des Arts Decoratifs in Paris, producing tableware & other functional glass.
In 1926 he began to produce French art glass that he called “Degué”, opening the Verrerie d’Art Degué in Paris, a glassworks at Boulevard Malesherbes along with a gallery at 41, Avenue de Paris.
He used mainly natural motifs on his cameo glass pieces and became known for his use of bright colours although items made after 1930 were frosted and more subdued
Degué made vases, paperweights, bowls, perfume bottles, stemware items such as liqueur glasses, lightshades, chandeliers, art glass lamps, and half-round ceiling lampshades made of translucent layers of colourless glass internally decorated by swirls of colour.
From 1928 Degué collaborated with the French ceramist Edouard Cazaux and this collaboration produced wonderful items with strong geometric designs in very thick molded glass and it is for these items that Degué is possibly best known.
Guéron became embroiled in 6 years of litigation with Charles Schneider after he copied Schneider’s Art Deco works. The case was finally settled out of court in 1932 but with massive financial consequences for all concerned.
Degué was commissioned to create 6000 individual crafted glass panels for the French ocean liner SS Normandie which was launched in 1935. (The Normandie was seized by US authorities at New York and renamed USS Lafayette and in 1942 whilst being converted to a troopship caught fire and capsized in New York harbour.)

The Degué glassworks stopped operating in 1936 due to the great strikes and was officially closed in 1939 at the outbreak of WWII.

Léon Hugue
Léon Hugue made bronze lighting fixtures in both classical and modern (art deco) style. Their factory was at the Rue des Rondeaux and their shop was in the Rue de la Pierre-Levée. In 1933 Léon Hugue sold the company to Charles Freres.