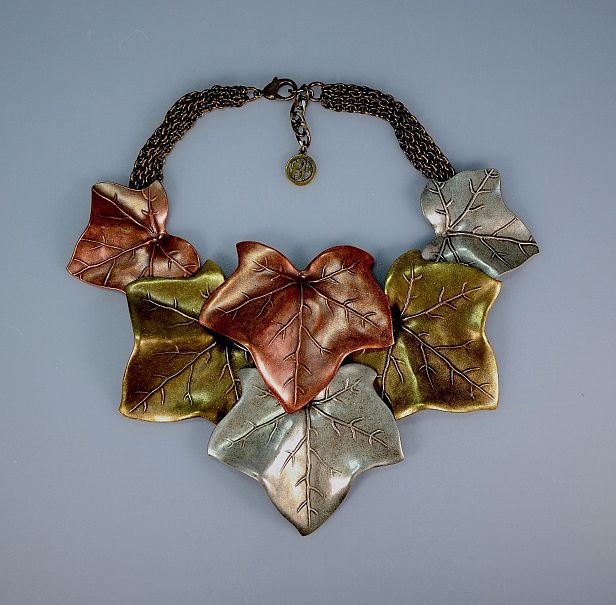 This very dramatic necklace is by Ben-Amun. It comprises 6 metal leaves. The centre leaf is silver tone metal above and slightly behind which is a copper tone metal leaf of the same size with a larger bronze tone metal leaf on either side which lie underneath the silver and copper leaves. On the left side of the bronze tone leaf is a smaller copper tone leaf with a silver tone leaf on the other side. The leaves are "strung" on a bronze tone metal chain the back sections of which are three stranded. The necklace has a lobster claw fastener with an adjustable chain at the bottom of which is an openwork bronze tone metal disc with the initials "BA". On the reverse of each leaf is a triangular shaped cartouche stamped "Ben-Amun". This would look fabulous with that LBD or with jeans and a shirt.

Ben-Amun
Ben-Amun was founded by Isaac Manevitz who is originally from Cairo and is the son of the jeweller to the Egyptian royal court. The name Ben-Amun comes from Isaac’s eldest son Ben and the Egyptian Pharaoh Tutankhamun.
Based for the last 30 years in the Garment District of New York City Ben-Amun is continually featured in top magazines, has graced the runways of top designers such as Calvin Klein, Tory Burch, and Michael Kors, and numbers an impressive roster of A-listers amongst his fans, including former First Lady Jacqueline Kennedy Onassis, Kate Moss, and Blake Lively.