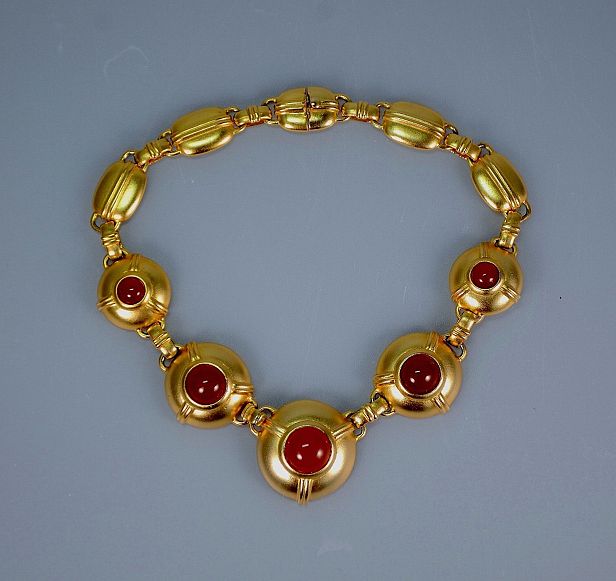 This lovely collar style necklace is by Ben-Amun and was made around 1984. The necklace is gold plated metal and the front section is 5 round domed discs each centrally set with a faux cornelian cabochon. The largest disc is in the centre and the remaining discs graduate in size from the centre disc. Each side of the back section has two ridged slightly domed coffee bean shaped sections with a similarly shaped tongue fastener. All the sections are interspersed with ridged domed flat backed links s that the necklace is fully articulated. All the components except the small links are marked with a triangular cartouche that is stamped "Ben-Amun".

Ben-Amun
Ben-Amun was founded by Isaac Manevitz who is originally from Cairo and is the son of the jeweller to the Egyptian royal court. The name Ben-Amun comes from Isaac’s eldest son Ben and the Egyptian Pharaoh Tutankhamun.
Based for the last 30 years in the Garment District of New York City Ben-Amun is continually featured in top magazines, has graced the runways of top designers such as Calvin Klein, Tory Burch, and Michael Kors, and numbers an impressive roster of A-list fans amongst his fans, including former First Lady Jacqueline Kennedy Onassis, Kate Moss, and Blake Lively.