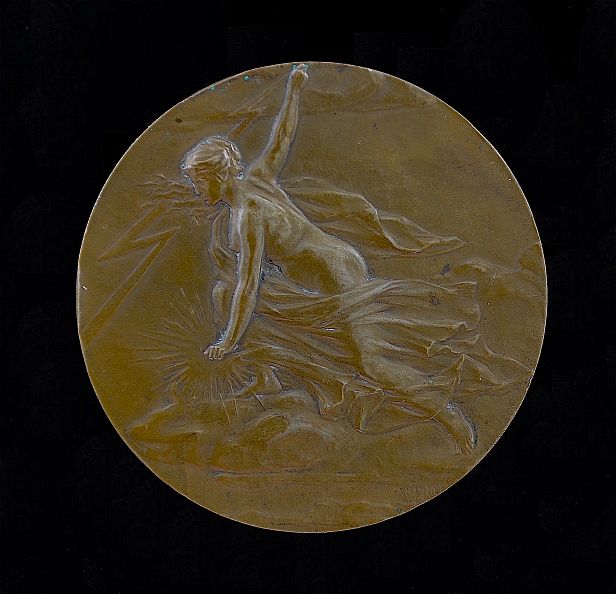 This wonderful Art Deco bronze medal is by Charles Pillet. The obverse depicts the naked female figure of Electricity, flying over clouds, creating a flash of lightning and a spark.
It is signed "Ch. Pillet" bottom right. The reverse depicts a view of a village in mountainous countryside, waterfall and hydro-electric lines in left foreground. In legend are the words "Syndicat General de la Construction Electrique (Electrical Engineering Union). The rectangular cartouche has been engraved "Mme. Eugenie Repellin". The rim is stamped "Bronze" and with the Monnaie de Paris cornucopia mark.

Charles Pillet (1869 – 1960)
Born Charles Philippe Germain Aristide Pillet in Paris on 20 July 1869 he was a sculptor and medallist.
He studied under Henri Chapu and Jules-Clement Chaplain.
He was awarded the Premier Grand Prix de Rome in 1890 for medal sculpture and became the secretary of la Societe des Artistes Francais in 1898.
He was made a Chevalier de la Legion d’honneur in 1911.
He died in 1960.