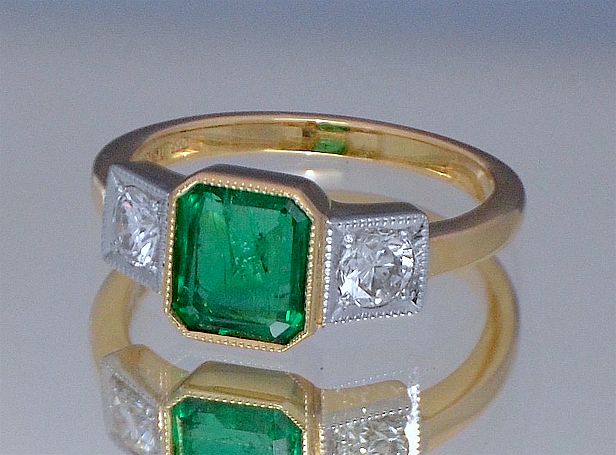 This super ring has been handmade by our jeweller to Alan's design. In the centre of the ring is a emerald cut fine green emerald set in an 18ct yellow gold mille-grained rubover setting. On each side of the emerald is a round diamond claw set in mille-grained platinum within the 18ct yellow gold box setting above an 18ct yellow gold shank that has been hallmarked by the London Assay Office for 18ct gold and platinum and 2016 and with our sponsor's mark "A&SP" for Alan & Sue Poultney. The emerald which has been re-cut by Alan has a certificate from the Gem & Pearl Laboratory.

The emerald is accompanied by a certificate dated 4 July 2014 from the Gem & Pearl Laboratory stating that it is a natural emerald and there is evidence of significant clarity enhancement i.e. it has been oiled