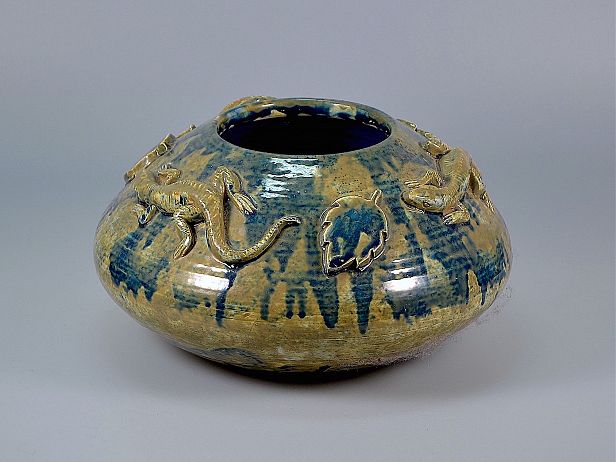 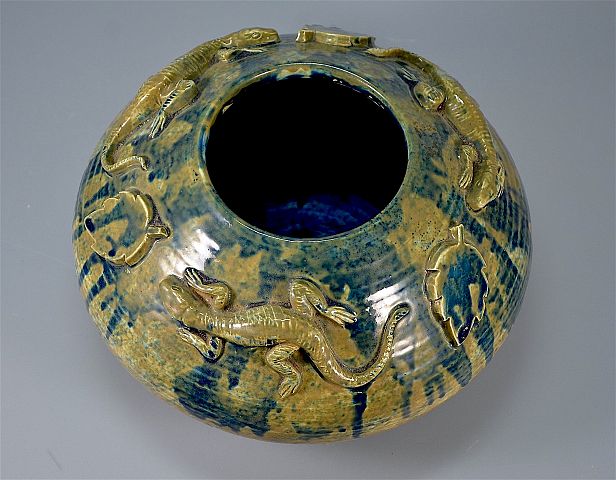 This flat ovoid earthenware bowl was made by Eric Olsen probably in the mid-late 1930s. It is decorated with a blue and olive glaze with 3 crawling lizards and 3 leaves applied around the rim in an alternating pattern. The base is stamped "Eric Olsen" in a rectangular cartouche. This is a great piece of studio pottery.

Eric Olsen
(1903 - ?)
Norwegian also known as Erling Olsen
He studied at the Oslo School of Art, St. Martin's School of Art, London and the Sèvres faience studio.
He worked at Wedgwood as a designer and modeller in 1931 designing a range of Art Deco relief-moulded ornamental earthenware.
He joined Spode as a designer in 1934 but may have worked with the company from about 1932. It appears that he had his own studio and was allowed to use Spode’s glazes and bodies.
In 1936 Olsen was selected as a National Register Designer by the English Board of Trade and in 1937 the Queen of Norway opened an exhibition of his studio type wares in London. All this despite the fact that Spode did not encourage self promotion by their designers.
In 1940 Spode appointed him as designer and modeller giving him responsibility for new designs and shapes. He excelled at surface design and although probably
best remembered for his animal figures, his Toby Jugs of Churchill & Roosevelt were hugely popular.
In 1942 Olsen left Spode and joined the Norwegian Quartermaster General as a camouflage expert.
After World War II he emigrated to the United States becoming chief designer at Haeger Potteries in Illinois from 1947 to 1972.