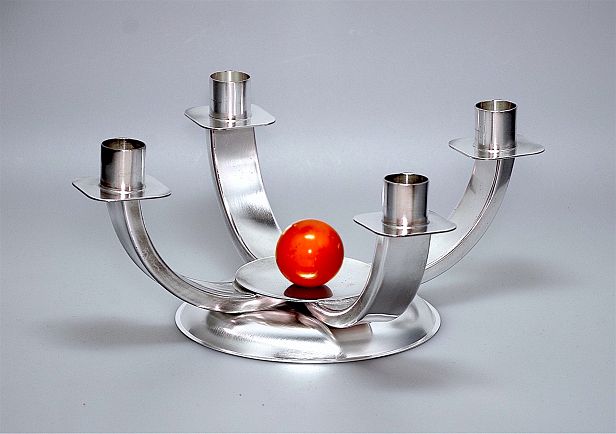 This superb silver plate & bakelite candelabra was made by the German company Quist. Made during the Art Deco period it has a round domed base that supports four curved branch rams with square round edged sconces below tubular candle holders. In the centre of the candelabra is a round plate with a sphere of butterscotch bakelite. The underside of the base is marked with a round cartouche within a domed cartouche. Thevinner round cartouche is stamped "Quist" and with a 5-point star. Useful & stylish.

F.W. Quist, Metallwaarenfabrik
Esslingen Germany
Founded 1866 by Jakob Schweizer, Friedrich Wilhelm Quist (1831-1903) and others. In 1890 Quist took over from the other shareholders and owned the company on his own and it became known as F W Quist Metallwaarenfabrik & the Quist family continued to manage the firm until 1951. The company closed in 1981 due to insolvency.
Quist was famous for its plated silverware in Germany and in many European countries as they did a lot of export work. They mostly produced luxury goods rather than goods for daily use.