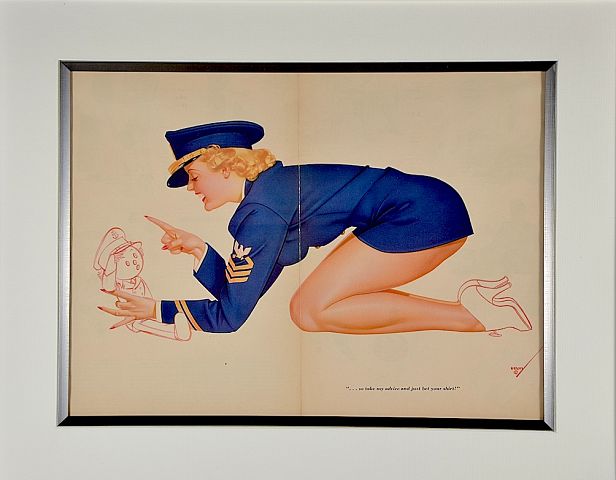 This lovely picture is a 1940s centrefold by George Petty. It depicts a kneeling woman dressed in a blue military uniform (probably US Navy although the badge insignia is stylised )and cap holding a doll/puppet also dressed in military type uniform in one hand and pointing at it with the other hand. At the bottom of the picture are the words "… so take my advice and just bet your shirt!" It is signed. We have framed this with a silver tone inner slip a cream mount and a chrome frame.

I believe that this centrefold was done towards the end of Petty's time with Esquire magazine. Petty worked for Esquire during the period 1933 -1942.

George Petty (1894 - 1975)
Born Louisiana USA 1894 he studied at the Academie Julian Paris before returning to Chicago in 1916 where his father had a photographic studio where Petty had learned airbrush techniques at an early age. When his father died, Petty went to work for an ad agency where he put his amazing airbrush talents to good use whilst at the same time trying to break into the illustration market.
He opened his own studio in the early 1930s and began to get more and more work featuring pretty women. At this time his daughter Marjorie was modelling for him.
In 1933 Petty joined the men’s magazine Esquire and the Petty Girl was born. Although the Petty Girl had been around in one form or another before Petty joined Esquire, she became a nationwide icon once Petty joined Esquire Magazine. Petty began painting middle spreads and calendars for the magazine on a regular basis during the late '30s and more popularly the 1940s but the Esquire work brought him to the attention of national ad agencies and within two years he was doing monthly ads for Old Gold Cigarettes and Jantzen swimwear amongst others. Jantzen even created a Petty Girl swimsuit.

In 1942 after lengthy negotiations with Esquire over money and rights to his artwork failed, Petty left Esquire and the work of creating the centrefold passed to Alberto Vargas who had been brought in during the negotiations. The Varga Girl took over from the Petty Girl in Esquire. However Petty went from strength to strength. In the early '40s, Petty was contracted to produce the covers for the famous Ice Capades revue, a job that he held for many years. In 1946 he did art work for the Ziegfield Follies and in 1945 he joined True Magazine, producing annual gatefolds in the magazine. His artwork appeared on everything from playing cards to drinking glasses, matchbook covers to car bonnet mascots.