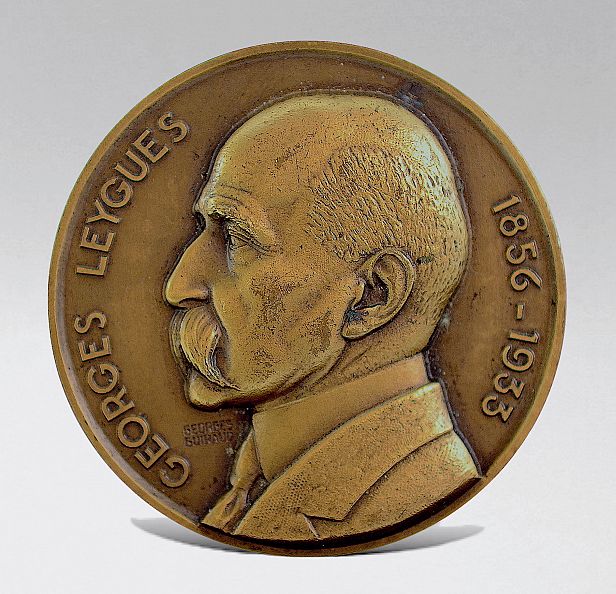 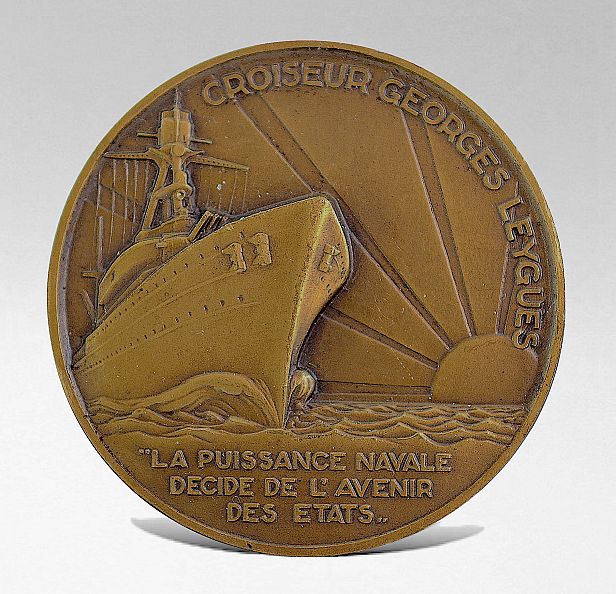 This bronze medal commemorates the life of Georges Leygues (1856 -1933).
The medallist is Georges Guiraud.

The obverse depicts a bust in high relief, of Georges Leygues in profile looking left.
The words "Georges Leygues 1856 - 1933", are stamped around the edge of the medal.
It is signed "Georges Guiraud"

The reverse depicts a battleship on the seas in high relief on the left side with the sinking sun in the background on the right.
The name of the ship, "Croiseur Georges Leygues" is around the top right edge.
"La Puissance navale decide de l'avenir des états" (Naval power decides the future of countries) is across the bottom.

When he was Minister of Marine, he collaborated with the navy's chief of staff Henri Salaun trying, unsuccessfully, to gain government funding for naval re-armament over army rearmament such as the Maginot Line.

Cruiser Georges Leygues
A French light cruiser named after Georges Leygues.
She was commissioned in1937 & initially served under Vichy France until 1942 when she served the Allies.
She provided naval support for both the Overlord and Dragoon invasions of France.
She had a major refit at Casablanca between May 1945 and late Jan 1946.
In the 1950s, she saw action in the First Indochina War and in the Suez Crisis.
She was sold for scrap in November 1959.

In 1942 he was appointed as artist for the Navy

In the second half of the 1950s , he was commissioned by the Esso Company to create three figureheads for Esso Paris , Esso Parentis and Esso Bourgogne.
The statues were made of synthetic resin measuring some 5m high by 8m wide.

There is a street named after him in Saint-Hilaire-au-Temple (Marne).