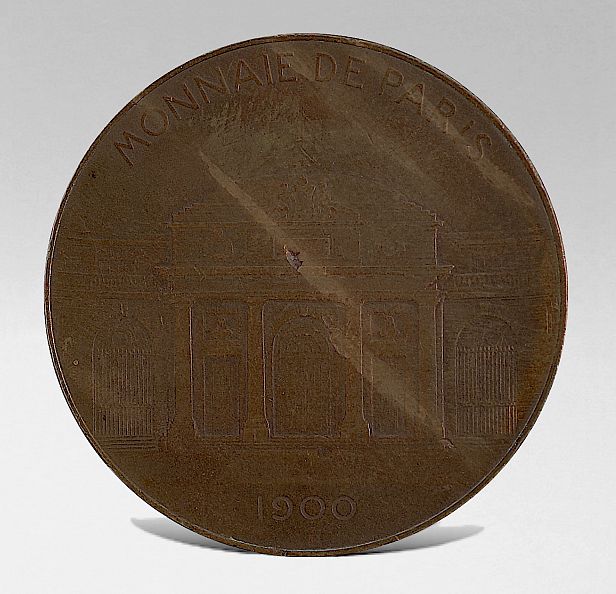 This bronze medal is by Henri-Auguste Jules Patey.
It is a souvenir medal from the 1900 Paris Exhibition published by the Monnaie de Paris.

The reverse depicts two Mint workers pouring molten metal into moulds in the foreground with furnaces in the background.
The Latin inscription "Aere Argento Auro Flando Feriundo" is around the top part of the medal.
There is a cornucopia (the mark used by the Monnaie de Paris at that time ) beneath the depiction of the two men.

Henri Auguste Jules Patey
(9 September 1855, Paris – 17 May 1930)
French sculptor, medallist and coin engraver.
Patey studied sculpture with Henri Chapu and engraving and medal making with Jules-Clément Chaplain.
He was admitted to the École Nationale Supérieure des Beaux-Arts in 1873.
In 1875, he won the second Prix de Rome for medal engraving.
In 1881 he won the first Grand Prix de Rome for medal engraving.
He won further prizes in 1886 (third), 1887 (second) and 1894 (first).
He won a bronze medal at the 1889 Universal Exhibition of 1889.
In 1896, he succeeded Jean Lagrange as chief engraver of the Paris Mint, a position he held until his death in 1930.
In 1898, he became a knight of the Légion d'honneur.
He was a member of the Académie des Beaux-Arts from 1913.
He produced many portrait medals of clients, relatives and friends.