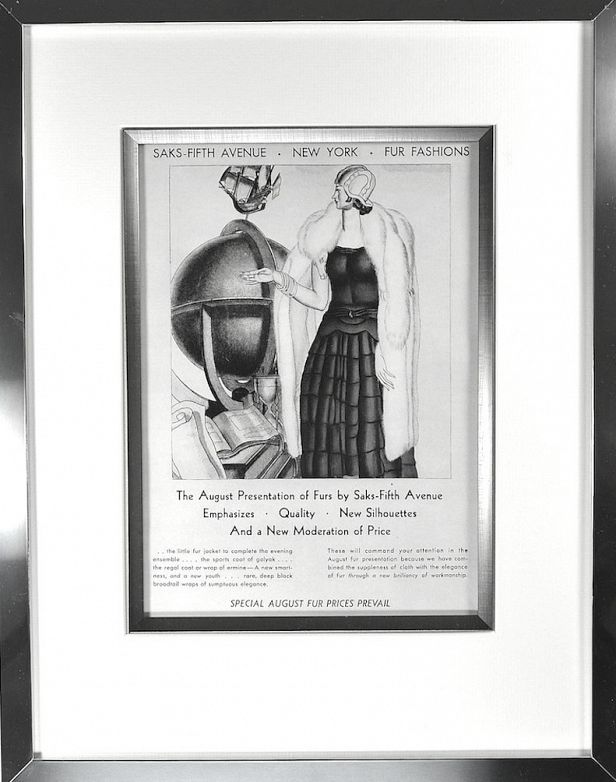 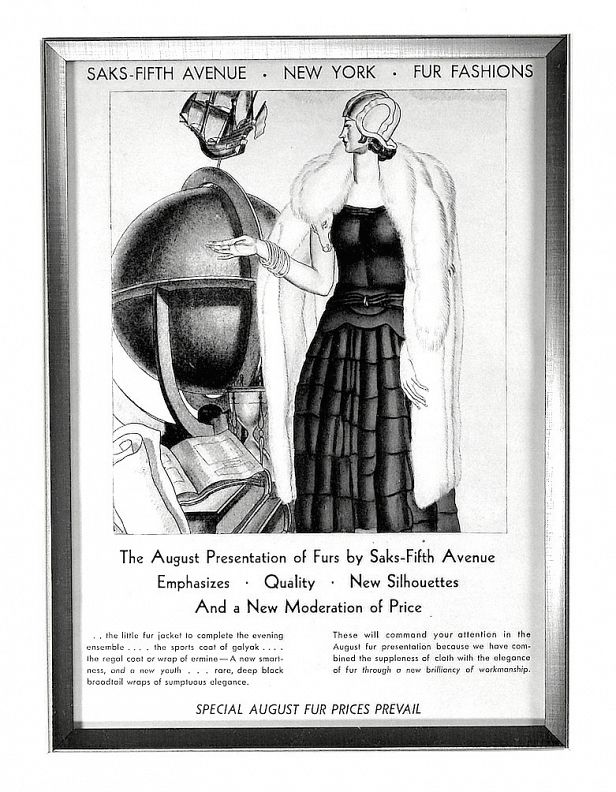 This fantastic picture is a magazine advertisement for Saks 5th Avenue New York that appeared in American Vogue during the late 1920s - early 1930s and was designed by Jean Dupas the famous French artist. This particular advertisement was for Saks' furs. We have framed this with an inner chrome slip, a cream mount and a chrome finish frame.

Jean Theodore Dupas
(1882-1964)
Born in Bordeaux on February 2, 1882, Dupas was a designer, poster artist, and decorator.He was part of the Bordeaux School, which included Robert Eugene Pougheon, René Buthaud, Jean Gabriel Domergue, Raphael Delorme, and Alfred Janniot.
In 1910, he won the Prix de Rome, and spent two years in Italy. It was here that he completed "Le Danse", a study for a larger painting titled, "Les Pigeons Blanc" (The White Pigeons). This painting was presented in 1922 at the Salon des Artistes Français, where it won the gold medal.
In 1912 the Bordeaux industrialist Henri Frugès commissioned Dupas along with Daum Freres, Jean Dunand, Edgar Brandt & René Buthaud to renovate his townhouse and help him turn it into a showcase for the best contemporary art.
In 1925 Dupas exhibited his painting “Les Perruches” (the Parakeets”) at the Grand Exposition Internationale des Arts Décoratifs et Industriels Modernes in Paris, (the term Art Deco is derived from this exhibition).
Dupas decorated the interiors of the Île-de-France, the SS Liberté, as well as the SS Normandie, in 1934,
In 1941 he became a member of the Académie des Beaux-Arts.
Dupas did many posters and other advertising work. His work was frequently featured in Vogue and Harper's Bazaar. In 1927 he created a catalogue for Max the furrier. A "Dupas woman" generally has a certain “look” - cropped hair, almond shaped eyes, elongated neck and small full mouth.