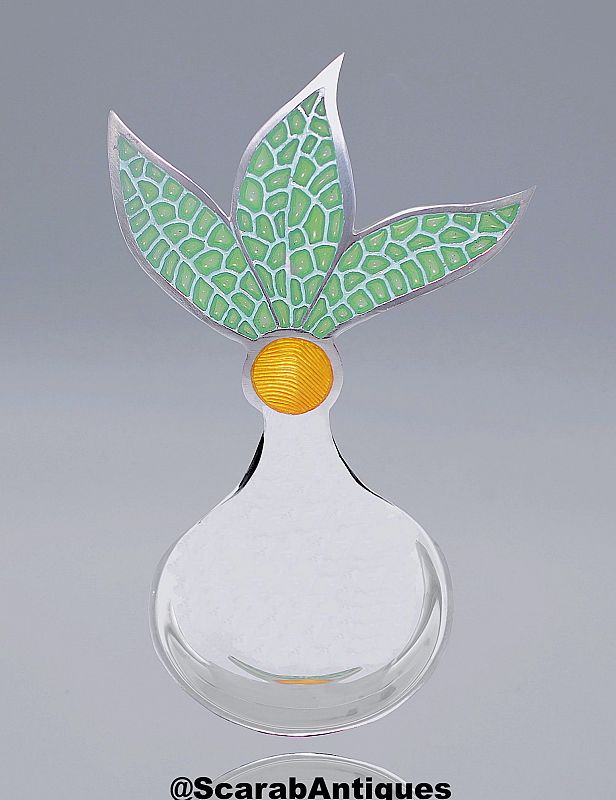 This fascinating silver & enamel caddy spoon known as "Cape Gooseberry" was made by the award winning enamelist Jean Wilkinson.
Inspired by the "Cape Gooseberry" the gooseberry is depicted by a round golden yellow guilloche enamel set above the silver bowl.
Above the gooseberry are 3 silver leaves with green plique a jour enamel.
The silver has been recessed & textured around the cells holding the green plique a jour enamel.
A thin layer of enamel has been laid over the recesses giving the impression of white enamel and giving a 3D effect.
The play of light across the plique a jour enamel & recessing & the guilloche enamel creates a fascinating impression of movement.


Jean Wilkinson
Silversmith, Jeweller, Enameler
Born in the Republic of Ireland, Jean knew from an early age that she wanted to be a silversmith but she was not able to begin to realise those dreams until her thirties after a successful career in I.T. designing and programming computer systems. Fittingly it was this career that enabled her to finance her silversmith training.
She trained under Brain Clarke, Michael Good, Lori Talcott, Eva Hofelmaier and Phil Barnes.
Jean is inspired by nature, its colours shapes textures & spaces, by the work of the Art Nouveau enameller Eugene Feuillatre and most lately by the mentoring and teaching of Master Enameller Phil Barnes who Jean credits with bringing her to where she is today: an award winning silversmith jeweller & enameller and the only person in this country working with plique a jour done in this method on large pieces.
Jean has won awards at the Goldsmiths Craft & Design Awards in the Enamellers Senior section in 2011, 2014 & 2016.
In 2020 Jean won the Gold Award at the Goldsmiths Craft & Design Awards in the Enamellers' & Enamel Painters' Senior Section for her plique a jour & silver bowl depicting fish swimming among lilies.
She has participated in a number of exhibitions and in 2013 gave the Master Class on plique a jour enamelling at the Guild of Enamellers 2013 annual conference held at Queen Ethelburga’s College York.
Jean is a member of the British Society of Enamellers and the Guild of Enamellers.