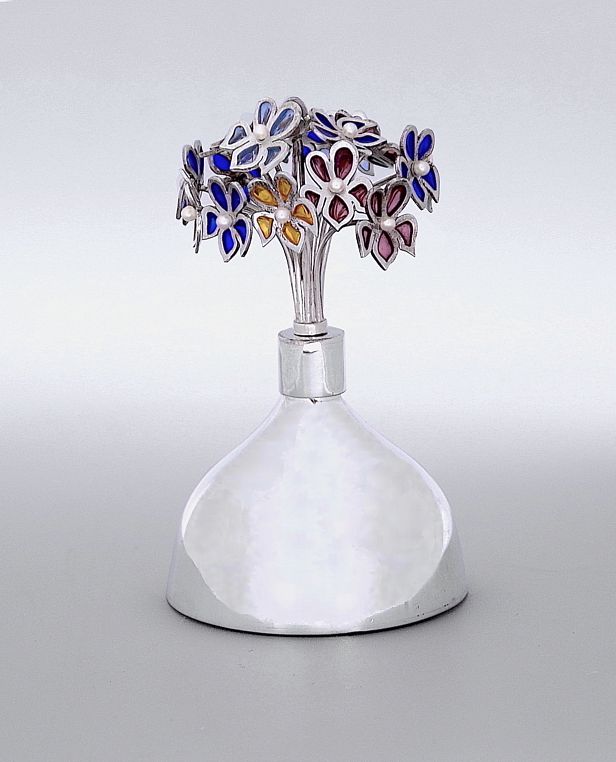 This is such a pretty scent bottle.
It is made by the award winning enamelist & silversmith, Jean Wilkinson.

The solid silver flat bottle domed base/bottle has a short neck leading to the cap.
The silver cap has a round top from which "sprout" a bouquet of 16 silver & plique a jour enamel violets with small pearl centres.

The violets are on long stems and are cobalt blue, pale blue, purple & yellow plique a jour enamel.

It is hallmarked by the London Assay Office for silver, 2009 & bears the sponsor's mark "JW" for Jean Wilkinson.

Plique a jour
Plique a jour ("glimpse of day") is a type of enamel which creates the translucent effect of a stained glass window. There are two methods. The first is where the enamel is put into “cells” made of metal usually silver or gold that have no backing.
These are then fired at very high temperatures.
A number of firings can be done. This method was used by Lalique & Feuillatre and is used by Jean Wilkinson.
The second method is the etched method as used by Thesmar.
A copper form has wires laid on it, much like cloisonné, the enamel is then applied to this backing and fired onto it.
The copper is then etched off with acid.
The appearance of this type of plique a jour is different.