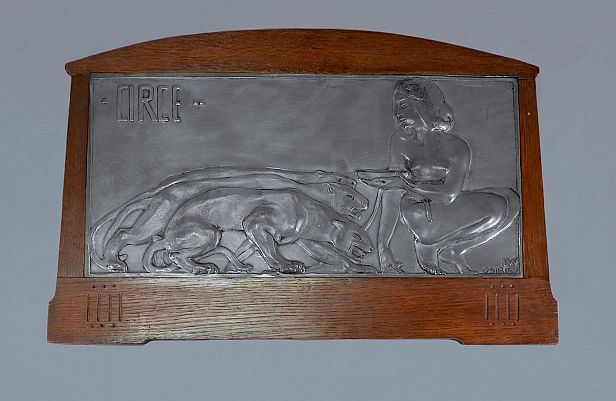 This fabulous plaque was designed by Josef Wackerle for the company Osiris and made c. 1900-1906. It is made of pewter and depicts the goddess Circe semi-nude and in the kneeling position looking back over her right shoulder at three crouching panthers. In her left hand she bolds a bowl. The plaque is stamped "IW Osiris" (IW being for Josef Wackerle) in the bottom right-hand side and "CIRCE" in the top left-hand side. The plaque has a period oak frame. A wonderful and ,our opinion, rare piece.

Osiris Metallwarenfabrik
The Osiris Metallwarenfabrik was founded by father & son Friedrich & Walter Scherf in 1899 in Nuremberg.
Walter had previously worked for Orivit from whom he took both employees and ideas. In 1902 Walter Sherf developed a new type of pewter the “ISIS” metal and from 1902 to 1905 Osiris won medals at Turin, St. Petersburg (gold) St Louis (1st & 2nd prizes) Cape Town (gold).
By 1909 the firm was almost bankrupt and in that year Walter Scherf committed suicide bringing the company to an end.

Josef Wackerle
Born in Partenkirchen in 1880.
By the age of 13 he was attending the wood-carving school in his hometown. He then trained as a sculptor at the arts-and-crafts school and art academy in Munich. In 1899, he received a scholarship to travel to Italy where he focused on ancient art and pottery.
When he was 26, he was asked by the Nymphenburg Porcelain factory to submit initial designs, which resulted in a cooperation between them that lasted for decades.
From 1913 to 1917 he worked as a teacher at the Museum of Decorative Arts in Berlin and became a lecturer at the Munich Academy, where he taught until 1950.
In 1937 he was proposed by Joseph Goebbels for the German National Prize for Art and Science. In 1940, on his 60th birthday, Wackerle received the Goethe Medal for Art and Science after a recommendation from Hitler. He was highly rated as an artist by the Nazi rulers and designed some of the statues at the 1936 Olympic Stadium in Berlin. In August 1944 he was named by Hitler on the list of the most important German sculptors, thus freeing him from military duty.
In 1953, he was awarded the Visual Arts Promotion Prize by the city of Munich.
He died in 1959 and is buried in the Partenkirchen cemetery

Circe
Circe was a sorceress best known for her ability to turn men into animals. The daughter of Perse and Helios, she is remembered for her encounter with Odysseus and his men and renowned for her knowledge of magic and poisonous herbs.
When Odysseus and his men landed in Aeaea, his crew later met with Circe and were turned into pigs. Circe's spells had no effect on Odysseus because he had been given a protective herb by Hermes. Circe realizing she was powerless over him lifted the spell from the crew and welcomed them in her home.
Circe had a child Telegonus by Odysseus, Telegonus later ruled over the Tyrsenians.
Odysseus spent a year with Circe and when he left she warned him of the sirens that he would meet later in his journey.