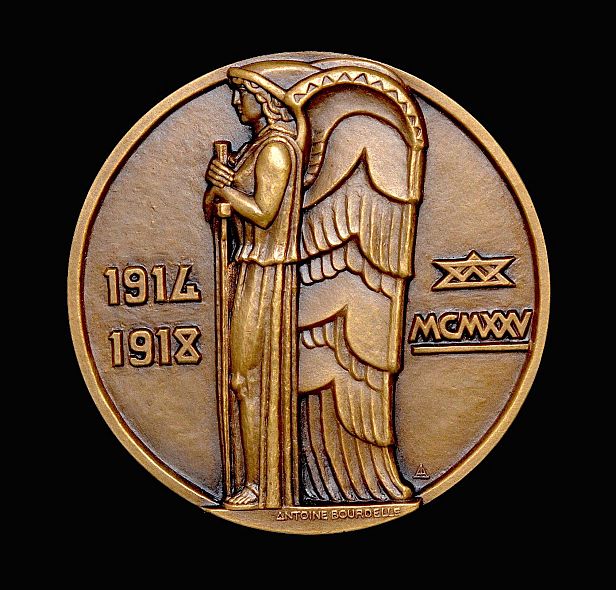 This wonderful bronze medal was engraved by Andre Lavrillier for Antoine Bourdelle. The obverse has a depiction of victory looking to the left. The dates "1914 1918" are stamped on the left and on the right is "MCMXXV" above which is a monogram for Antoine Bourdelle. The medal is signed Antoine Bourdelle at the foot of the winged victory and there is a monogram for Andre Lavrillier to the bottom right. The reverse depicts the war memorial at Hartsmannwillerkopf at the entrance to which can be seen the bronze depictions of victory that were sculpted in bronze by Antoine Bourdelle and which are depicted on the obverse of the medal. "Hartsmannwillerkopf" is stamped around the top half of the medal and the names of Robert Danis and Antoine Bourdelle the architect and the sculptor respectively for the memorial at Hartsmannwillerkopf are inscribed across the lower third of the medal. The edge of the medal is stamped "Bronze" and has the Monnaie de Paris Cornucopia mark.
There was a special comment about this medal in the Numismatics News "Arethuse Nr.12, July 1926". Apparently this medal was engraved and struck as a subscription in order to build the Monument which was built after this medal was struck.
This is a very special medal.

The Battle of Hartmannswillerkopf
The Battle of Harstmannkopf was a series of engagements during the First World War fought for the control of the Hartmannswillerkopf peak in the Vosges mountains of Alsace during 1915.
The mountain peak stands at 3,316ft and overlooks the Rhine Valley. It was a strategic area bitterly fought for by both sides. The most severe fighting for the peak took place on 19–20 January, 26 March, 25–26 April and 21–22 December 1915. Amongst the casualties was General Marcel Serret, commander of the 66th Infantry Division. After about 11 months of fierce combat both sides began to focus most of their attention farther north on the Western Front. Only enough men to hold the lines were left at Hartmannswillerkopf. The lines remained relatively stable for the remainder of the war and generally only artillery exchanges took place. 30,000 are estimated to have died near Hartmannswillerkopf during the First World War, the majority being French.
The National Monument of the Hartmannswillerkopf was inaugurated on 9 October 1932 . It consists of a crypt carved out of the bedrock. The entrance is approached by a cutting from the road and is flanked by two bronze representations of victory by the sculptor Antoine Bourdelle.

Andre Lavrillier
(1885-1958).
He initially studied under his father, an engraver, before studying under Chaplain and Bourdelle. Lavrillier was greatly influenced by Bourdelle. In 1914 he was awarded Le Grand Prix, Rome. He received the Honor Diploma in 1937 at the International Exposition in Paris.
He engraved many dies for the French Coins at the Paris Mint during the thirties, as well as for the British Royal Mint.
He was a Jury Member at the Ecole Nationale Superieure des Beaux Arts in Paris and in Rome.
He was also a Knight of the Legion d'Honneur.

Antoine Bordello
(1861 - 1929 )
At 13, Bourdelle was apprenticed to his father as a cabinet maker. In 1876, he was given a scholarship and passed the entrance examination for the École des Beaux-Arts in Toulouse, France, before moving to Paris in 1885 where he studied with the artists Jean-Baptiste Carpeaux and Jules Dalou. In 1885 he won a medal at the Salon of French Artists for his plaster cast of La Première Victoire d'Hannibal (Hannibal's First Victory).
In 1893, Rodin hired him as a sculptor's assistant.
In 1902 he received his first major commission - a war memorial at Montauban (his birthplace).
In 1900 Bourdelle, Rodin and the sculptor Desbois founded a free sculpture school in Montparnasse.
Bourdelle became a famous teacher, turning his studio into the Académie de la Grande-Chaumière.