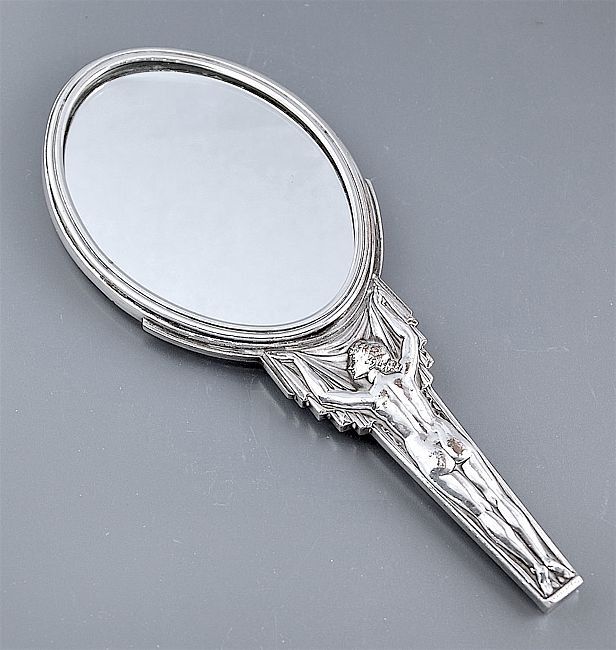 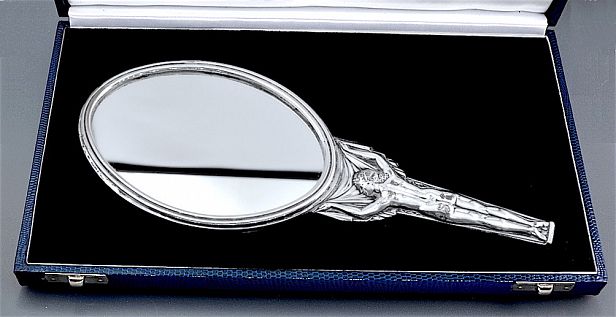 This beautiful silver plated double sided mirror is by Lucien Bazar. Made c1925 each side of the handle is cast with a standing female nude, her arms outstretched above her head holding a draped cloth and surmounted by the oval mirror. It is signed both sides "Lucien Bazor" at the bottom of the handle. It is in a new custom made blue box with a black velvet and cream silky interior.

Lucien Georges Bazor
(1889–1974)
Lucien Bazor was Chief Engraver at the Paris Mint from 1930 to 1958. He was born in Paris in 1889 and initially studied under his father, Albert Bazor, later becoming a pupil of Patey at the Ecole Nationale Superieure des Beaux-Arts. He won the Grand Prix de Rome in 1923 for his engraving.
Bazor is best known for his design of the 5 franc piece 1933, known at the time as the "Bedoucette" (after the contemporary Minister of Finance), now known as "Bazor". It was quickly replaced by the larger and heavier 5 francs Lavrillier. His 100 franc pieces 1929-1936 did not circulate, but were used as a convenient way to hoard gold. He also designed controversial pieces for Vichy France.