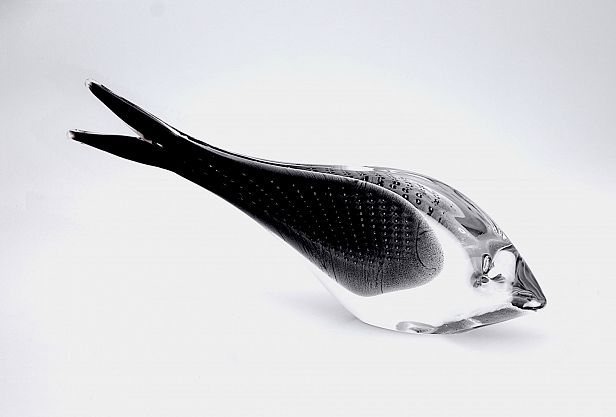 This is a fabulous fish!
It was designed by the Marcolin brothers for the Swedish company KM Konstglas probably during the 1960s.

The body of the fish It is made of an opaque grey glass underlay with controlled bubbles shading to dark grey towards the purplish/red tail all encased in clear glass.

FM Konstglas
Founded in 1961 in Sweden by two Italian brothers Josef & Benito Marcolin.
The Marcolin brothers trained in Murano before moving to Sweden in the early 1950s.
They initially worked for other glass blowers before founding FM Konstglas.
FM stands for Fare -Marcolin, Fare being the maiden name of Josef Marcolin's Swedish wife.
They were later joined by another brother Giovanni & a sister Annamaria.
Some of the early pieces from the 1960s were not signed and only labeled.
The company changed its name to FM Marcolin Art Crystal in 1983 to collaborate with Sardinia Crystal.
However Benito returned to Sweden & Josef moved to Austria and opened Marcolin Art Crystal.