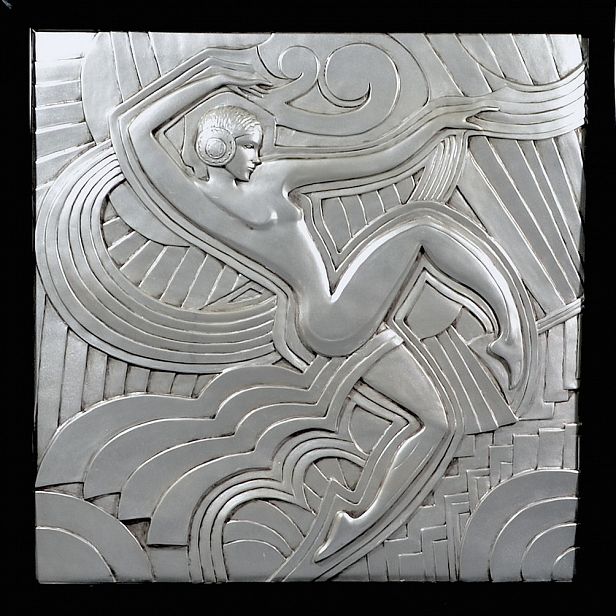 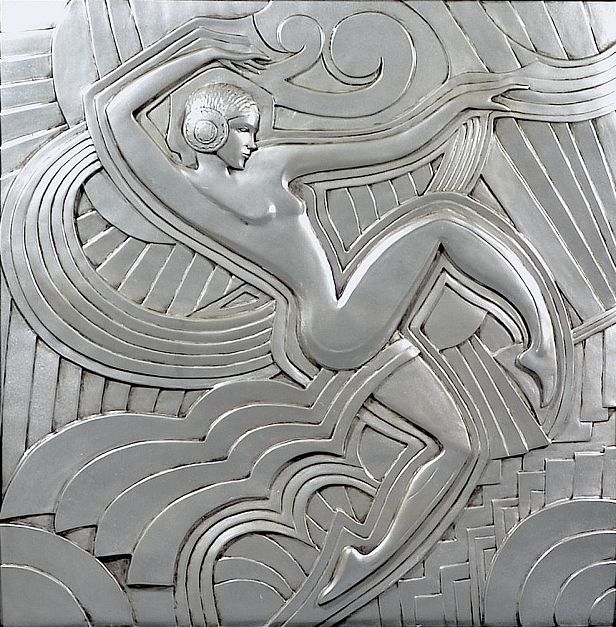 This superb plaque is made of silvered gesso/plaster. Originally designed by Maurice Picaud aka Maurice Pico, it depicts the Russian dancer Lila Nikolska and this was taken from a cast of the original concrete plaque that graces the front of the Folies Bergere building in Paris. Apparently a limited number were produced, some were for sale and others were given to members of Picaud's family. It has been reframed in a black lacquer frame. It is very heavy!!

Maurice Picaud aka Maurice Pico or Pico (1900-1977)
Architect, designer & painter.
Trained at the Ecole Boulle, he worked for Ruhlmann and produced cartoons for Science et Vie, The Sportsman, Auto or Le Matin .
He designed the facade of the Folies Bergère in Paris & murals in the Hotel de Ville and the Council Chamber at Montdidier in the Somme.

Lila (Elizaveta) Nikolska (1904 - 1955)
Born Vladivostok, Russia, Nikolska studied dance at the Tittiriova Dance Gymnasia in Odessa, Ukraine.
1919-1921 she was a soloist with the Romanov Ballet Company and a photographic model in France.
By 1921, she was in Prague with the Prague National Ballet, performing as a soloist in Swan Lake in 1922.
Between 1923-27, she was working as a choreographer with the Prague Ballet. At the same time she was a choreographer with hand performing at the Folies Bergere in Paris. Her performance in France can be seen in the 1927 film La Revue des Revues. It appears that she may have done other film work in France during this period. However, she did do choreography for a number of films made in Czechoslovakia in the late 1930s.
In 1929, Lila Nikolska performed Ancient Greek dances in front of the Parthenon in Athens, an event captured by the photographer Nelly.
Between 1930-32, she was working at the Cairo King's Opera.
In 1932, she returned to the Prague Ballet, working as Prima Ballerina, Ballet Mistress, and finally Ballet Chief 1940-45. Nikolska also ran dance schools, promoting dance using not just classical techniques but introducing gymnastics, acrobatics, Spanish and Oriental influences, including one in Lviv, Ukraine.
In 1945, following the Soviet Occupation of Czechoslovakia, Elizaveta Nikolska and her mother, left Prague to travel to Caracas, Venezuela to work with the ballet there. Unfortunately, Lila Nikolska died suddenly in 1955 and has since been forgotten.