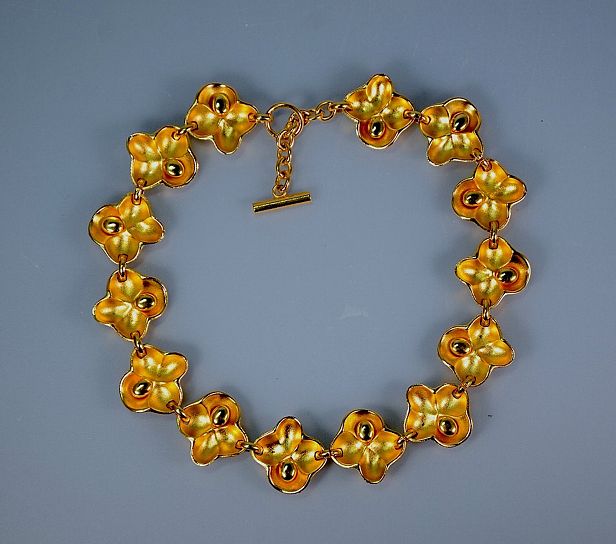 This classic gold tone necklace is by the fashion designer Oscar de la Renta.
It comprises 14 gold tone abstract flower sections with gold raindrops on one of the petals.
The flowers are linked by round gold tone links so that the necklace is fully articulated.
It has a bar and ring fastener.

The reverse of each flower is script signed "Oscar de la Renta".

The flowers are reminiscent of the tops of the scent bottles for "Oscar de la Renta" perfume. A very easy and elegant smart or casual wear.

Oscar de la Renta (1932- 2014)\
Born on July 22, 1932, in Santo Domingo, Dominican Republic.
Aged 18 he left to study painting at the Academy of San Fernando in Madrid and his talent for illustration landed him an apprenticeship with Spain's most renowned couturier, Cristobal Balenciaga.In 1961, while on vacation in Paris, he was hired for his first real fashion job at Lanvin-Castillo. Within two years, he had moved to New York and joined the American design house of Elizabeth Arden. He began his own signature ready-to-wear label in 1965. His first perfume debuted in 1977. He dressed Nancy Reagan in the 1980s, and then provided the gowns for inaugural events for both Hillary Clinton in 1997 and Laura Bush in 2005.
In 2002, de la Renta began a new venture designing furniture. His 100 pieces for Century Furniture featured dining tables, upholstered chairs and couches. In 2004, he added a less expensive line of clothing called O Oscar.
De la Renta died on 20 October 2014 aged 82 in Kent, Connecticut.