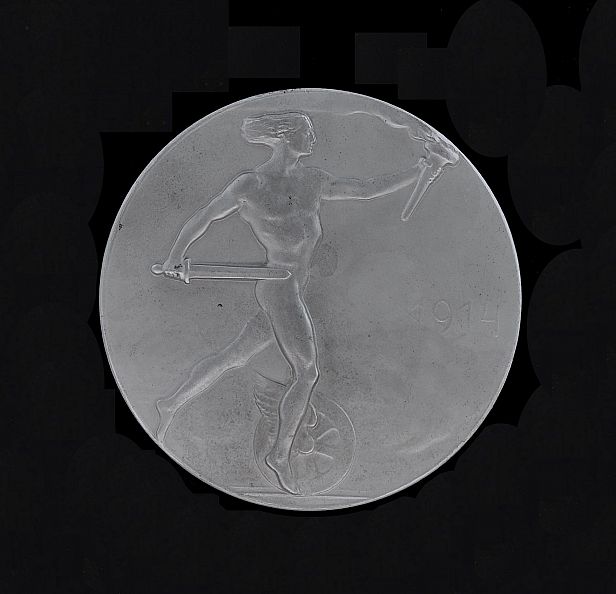 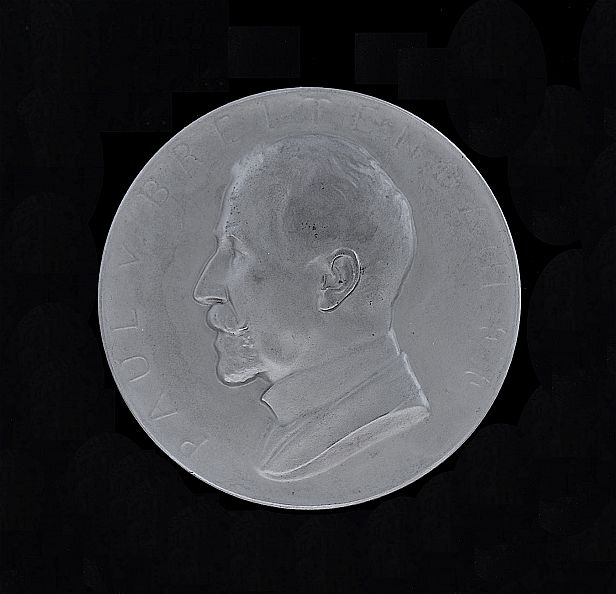 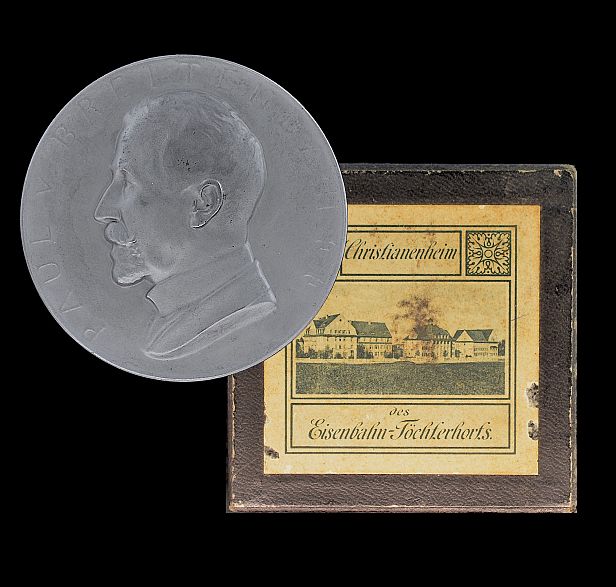 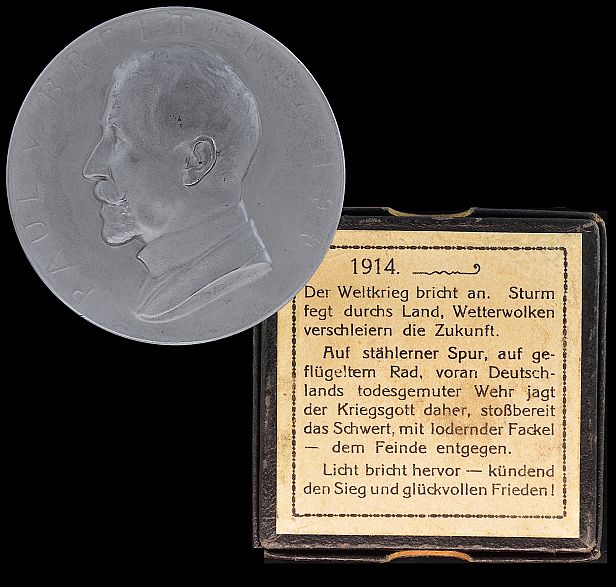 This base metal boxed medal was minted in 1914. The obverse depicts the bust of Paul von Breitenbach looking to the left with the words "Paul v. Breitenbach " followed by two military cross type symbols around the edge. The reverse depicts a naked man running left to right along a track with a drawn sword in his right hand and a flaming torch held aloft in his left hand, with a winged wheel, clouds and "1914" in the background. This image would appear to illustrate the writing on the bottom of the blue cardboard box:-
"1914. Der Weltkrieg bricht an. Sturm fegt durchs Land Wetterwolken verschleiern die Zukunft.Auf stahlerner Spur auf geflugeltern Rad voran Deutschlands todesgemuter Wehr jagt der Kriegsgott daher stossbereit das Schwert mit lodernder Fackel - dem Feinde entgegen. Licht bricht hervor - kundend den Sieg and gluckvollen Frieden" which roughly translates as "1914. The World War breaks . Storm sweeps through the country, weather clouds obscure the future .On steel track on winged wheel, goes Germany's mortal military following the God of War with drawn sword with flaming torch - against the enemy. Light breaks - bringing victory and joyful peace"
There are no signatures on either the obverse or reverse and no marks on the rim. The lid of the box has a picture of buildings and the words "Christianenheim des Eisenbahn Torchterhorts."

Paul Justin von Breitenbach
(1850 –1930) Prussian politician & railway planner central to the building of the Berlin underground, specifically the line between the city centre and Berlin-Dhlem. The Breitenbachplatz in Dahlem was named after him in 1913.
Born in Danzig he studied law in Leipzig & Berlin
In 1872 and 1873 he was Gerichtsreferendar (Assistant) in Danzig, and then Gerichtsassessor at the local court in Berlin. In 1878 he entered the Prussian State railways administration, first in Hanover & then in Breslau. In July 1884 he came to Berlin to work for the state-owned Berlin-Hamburg railway.
From 1893-95, Breitenbach was the director of the Eisenbahn-Betriebsamt (railway traffic office), first in Hanover, later in Hamburg. In 1896 he was a commissioner to the Prussian Minister for Public Works in Mainz. In 1897 he became president of the Royal Prussian and Grand Duchy of Hesse Railway Division .
In 1903 Breitenbach moved to Cologne, as president of the Königliche Eisenbahndirektion and served as Minister of Public Works from 1906 till 1916. During this time, he was also the head of the Imperial Office for the Management of the Imperial Railways in Alsace-Lorraine .
In 1909 he was ennobled and in 1913 he received the Order of the Black Eagle
From May 1916 until November 1917, Breitenbach was the vice president of the government of Prussia retiring in November 1918.