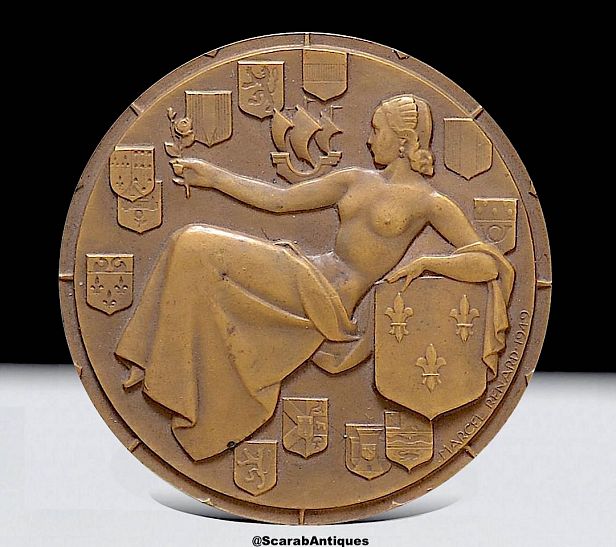 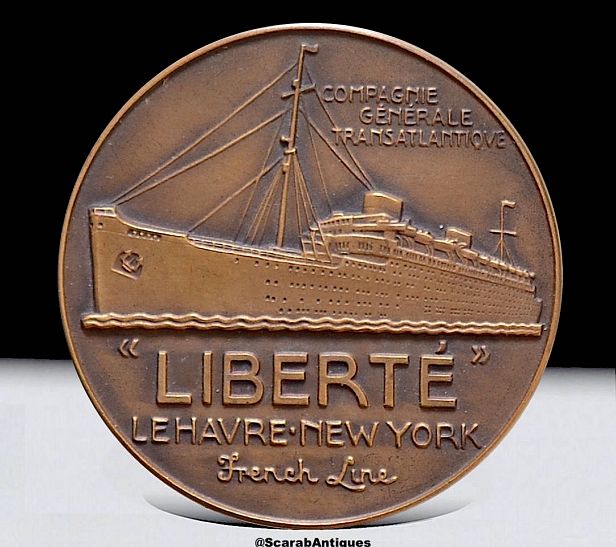 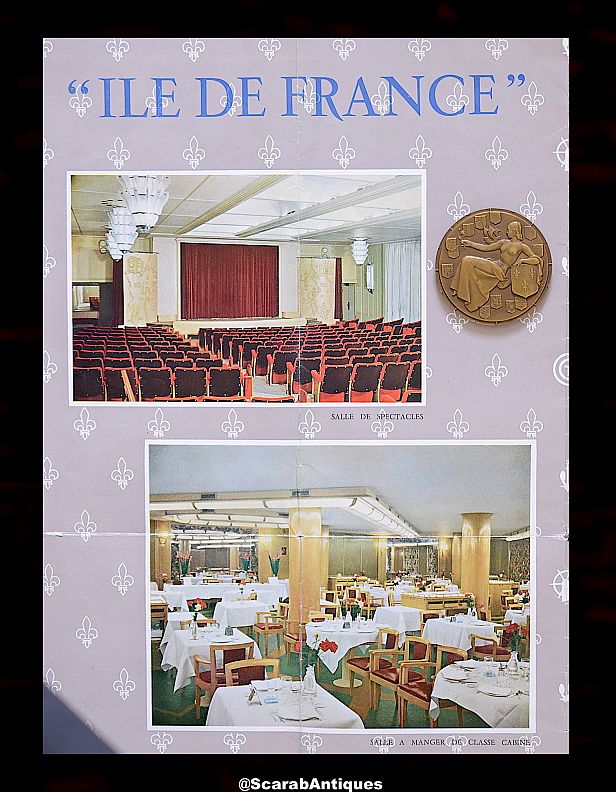 The bronze medal by Marcel Renard was issued to commemorate the post World War II launch of the Ile de France in 1949 on the transatlantic route by the French company Compagnie Generale Transatlantique. The obverse depicts a partially clad woman reclining on a shield decorated with fleur de lies and holding a rose with different town shields arranged around her in the background. It is signed "Marcel Renard 1949" The reverse depicts the Ile de France in the top third above a porthole with a recessed centre with seagulls & clouds with a map of France on the right and one of America on the left. The words "Ile de France" are cross the bottom and "Cie Gle Transatlantique" around the edge. The rim is stamped "Bronze" with the cornucopia mark of La Monnaie de Paris.

The bronze medal by Jean Vernon was issued to commemorate the launch of the SS Liberte in 1950 on the Le Havre - New York route for the French company Compagnie Generale Transatlantique. She was the running partner of the Ille de France on this route. The obverse depicts Venus rising from a seashell with a fish on each side. It is signed "Jean Vernon".
The reverse has an image of the ship with the embossed words " Liberte Le Havre-New York, French Line, Compagnie Generale Transatlantique".
The rim is stamped "Bronze" with the triangular stamp of Athus Bertrand.

The pamphlet shows the interiors of both ships after their post World War II refits.
I thought that it would be great to have both medals with the pamphlet.

Marcel Renard
1893-1974
He studied under his father before joining l’Ecole des Beaux-Arts Lyons where he studied under Aubert & Ploquin. He then studied at l’Ecole des Beaux-Arts in Paris under Rost & Boucher.
He was awarded a gold medal at the 1925 l’Exposition des Arts Decoratifs
Renard exhibited at the Salon des Artists Francais and at the Salon des Artistes Decorateurs.
He worked with Roux-Spitz & Janniot on some of their projects in Paris & Lyons and his work can be found at the Museum of Fine Arts Lyons.

Jean Vernon (1897-1975)
Jean Emile Louis de Vernon (son of medallist Frederic Vernon) was born in Paris on 01 April 1897.
Attended the Ecole des artes decoratifs before being conscripted in 1916 as an artillery officer.
Attended the Ecole des Beaux-Arts in 1919 studying sculpture with Coutan & medal engraving with Patey.
First exhibited at the Salon of the Societe des Artistes Francais in 1922, receiving an honourable mention.
Awarded a silver medal in 1924 a gold in 1936 and the Salon’s medal of honour in 1957

SS Ile de France
The SS Île de France was a French ocean liner that was built in Saint-Nazaire, France, for the Compagnie Générale Transatlantique (or CGT, also known as the "French Line"). The ship was named after the region around Paris known as "L'Ile de France", launched in 1926 and commenced her maiden voyage on June 22, 1927. It was the first major ocean liner built after World War I, and was the first liner ever to be decorated almost entirely with modern Art Deco. She was neither the largest nor the fastest ship, but was considered the most beautifully decorated ship built by CGT, becoming the favoured ship of the pre-World War II era for wealthy & fashionable Americans travelling to Europe.
Île de France was the last civilian ship to leave France before the outbreak of WW11 leaving Le Havre on the morning of 3 September 1939, hours before France and the United Kingdom declared war on Germany.
Once in New York she was towed to Staten Island and laid up. In March 1940 she was lent to the British Admiralty and loaded with war materials sailing for Europe on 1 May 1940 veiled in grey and black. From there, she travelled to Singapore where she was officially seized by the British after France fell to the Germans.
August, 1942, found her in Port Elizabeth, South Africa where she was gutted and fitted out as a floating prisoner of war camp to prepare for the task of bringing POWs back from north Africa. In 1943 she was converted to a troopship.
In autumn 1945, the Île de France was returned to the CGT initially being used to ferry American and Canadian troops home. In April 1947, she returned to Saint Nazaire for a two-year restoration and in July 1949 she travelled to New York on her first post war luxury proving to be just as popular as before the war.
In 1950 the ship received a new running mate, ss Liberté, (formerly the German Blue Riband-holder SS Europa)
In 1949 Île de France was the setting for part of the first act of the Jules Styne Broadway musical Gentlemen Prefer Blondes starring Carol Channing.
On September 21, 1953, the Île De France rescued 25 of the 26 man crew off the Liberian freighter Greenville which was damaged and later sunk in an Atlantic tropical storm.
On July 26, 1956, the Île de France had a major role in the rescue operation following the collision of the passenger liners SS Andrea Doria and MS Stockholm off Nantucket rescuing 753 people.
In 1959 the Île de France under the name SS Claridon was used as a floating prop for the 1960 disaster movie The Last Voyage. During filming the ship was partially sunk .
The ship was then sold to a Japanese breaker for scrapping leaving Le Havre on 16 February 1959

SS Liberte (originally the SS Europa)
The Europa (later SS Liberté) was a German built ocean liner constructed for the Norddeutsche Lloyd (NDL) to work the transatlantic sea route. She and her sister ship, the Bremen were the two most advanced, high speed steam turbine ocean vessels in their day, and were a part of the international competition for the Blue Riband.
Europa made her maiden voyage to New York on 19 March 1930 taking the westbound Blue Riband from SS Bremen with the average speed of 27.91 knots and a crossing time of 4 days, 17 hours and 6 minutes. She held it till her sister ship the Bremen recaptured it in June 1933.
She was largely inactive during World war II. Plans to use her as a transport in the intended invasion of Gt. Britain (Operation Sea Lion) and to convert her to an aircraft carrier were not realised. In 1945, she was captured by the Allies and used as a troopship, sailing as the USS Europa On 8 May 1945 she was taken as a US war prize; acquired by the US Navy and commissioned on 25 August 1945.
In September 1945 she carried 4,500 homeward-bound American troops from Southampton to the USA, arriving in New York on 24 September 1945, making 2 more such voyages thereafter, having been enlarged for that purpose. Europa was decommissioned on 2 May 1946, and was later transferred to France in partial payment of war reparations.
The Compagnie Generale Transatlantique took over ownership and brought her to Le Havre for refitting into their service as a replacement for the SS Normandie. On 2 August 1950 she made her maiden voyage to New York under her new name, Liberté.
The SS Liberté was laid up in 1961 and scrapped in 1962.
SS Liberté was featured in the Jane Russell film The French Line and appeared in the final scenes of the 1954 classic film Sabrina starring Audrey Hepburn & Humphrey Bogart.

Arthus-Bertrand
Medals and decorations maker, founded in Paris in 1803 by Claude Arthus-Bertrand, an army officer during the French Revolution. Artists who have designed for the firm include Frédéric Auguste Bartholdi (sculptor of the Statue of Liberty) and Fernand Léger.
It is the official manufacturer of the French Legion of Honour and has made insignia for the Society of the Cincinnati and the Order of Lafayette