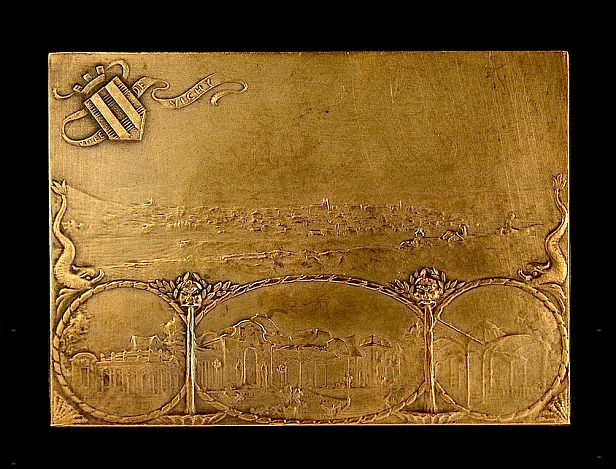 This lovely rectangular bronze medal is by Victor Peter. The obverse has a central cartouche in which is the Diana the Roman goddess of the hunt holding a bow in one hand and with a leaping greyhound behind her. There are boughs of oak leaves around this cartouche and the words "Exposition Canine Vichy" embossed above. The central cartouche is signed "V Peter" and "1923" is stamped at the bottom of the medal. The reverse depicts Vichy town hall in the foreground in decorative cartouches with a view of Vichy in the background and the Vichy town crest in the top left hand corner. The rim is stamped bronze and bears the triangular mark of Arthus-Bertrand.

Victor Peter
(1840 - 1918)
Victor Peter was a French animal sculptor and a painter & medalist. He was a pupil of Falguiere, worked with Rodin and was presented at Paris Salons

Arthus-Bertrand
Medals and decorations maker, founded in Paris in 1803 by Claude Arthus-Bertrand, an army officer during the French Revolution. Artists who have designed for the firm include Frédéric Auguste Bartholdi (sculptor of the Statue of Liberty) and Fernand Léger.
It is the official manufacturer of the French Legion of Honour and has made insignia for the Society of the Cincinnati and the Order of Lafayette.