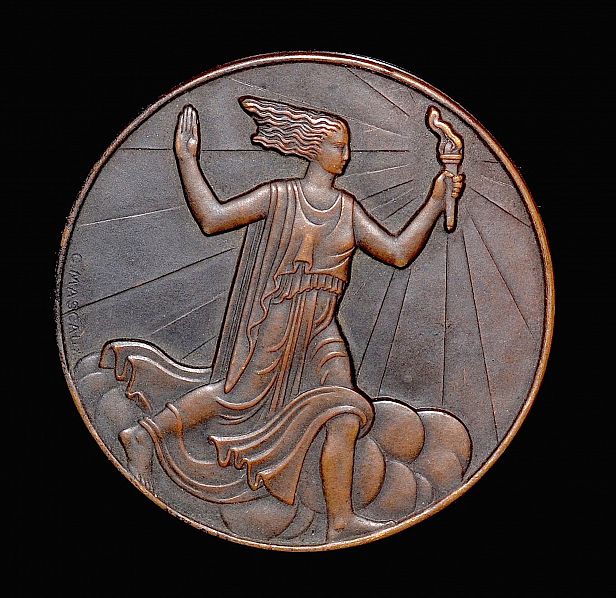 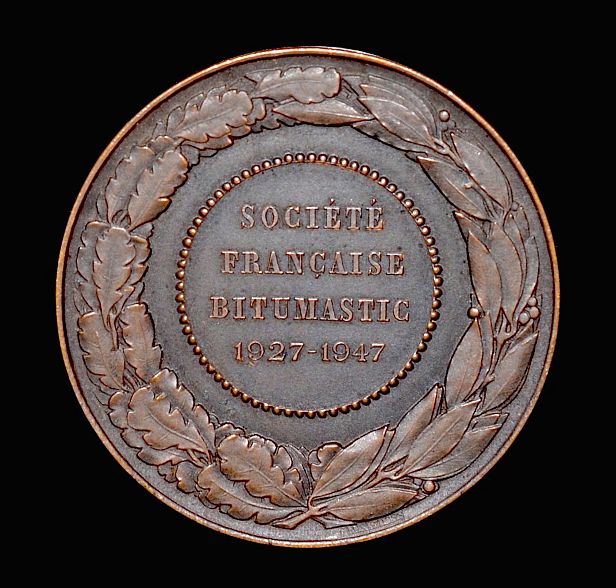 This fabulous bronze medal is by the French sculptor Claude Mascaux. The obverse depicts a classically clothed running female, her hair streaming behind her with a torch in her left hand and her right hand aloft. Rays of light stream from the torch and there are stylised clouds in the background. The reverse has a wreath of laurel and oak with an inner round bead edged cartouche in the centre of which are the words "Societe Francaise Bitumantic 1925 -1947". The edge is stamped "Bronze" and has a triangular mark. The medal is presented in a burgundy red box.

Claude Leon Lucien Mascaux AKA Claude Mascaux
(1882-1965)
French sculptor and medal engraver.
He studied at the Julian Academy and under Henri Bouchard & Paul Landowski.
From 1912 – 1948 art competitions were part of the Olympic Games and were split into 5 categories – architecture literature music painting & sculpture. In 1932 the categories were reduced.
At the 1924 Paris Summer Olympics Mascaux won a Bronze Medal in the Sculptor category for designing a medal
He won the Grand Prix at the Exposition des Arts Decoratifs, Paris de 1937. He also exhibited at the Salon de la Nationale des Beaux-Art, Paris and at the Societe Francaise des Amis de la Medaille.
His work can be found in the medal collection of the Bibliotheque National de France in Paris & the Victoria & Albert Museum, London.